Earlier this week, the U.S. State Department issued a global travel alert announcing the threat for terrorist attacks on Westerners and warning U.S. citizens to take precautions while traveling.

The travel alert expires on August 31, 2013, and nearly the moment it was issued, many U.S. travelers were scrambling to check their travel insurance policies and understand the terms under which they might be able to cancel their travel plans – and get a refund – or travel anyway and be sure their emergency medical care will be covered.

A Terrorist Act (by definition) May Not Be What You Think

Travel insurance doesn’t always apply to emergency situations the way many travelers expect it to – especially in cases of terrorism, or political and civil unrest that causes instability in certain regions of the world. Specifically, a terrorist incident is not the same as political or civil disorder or riots.

Understanding how your travel insurance plan defines a terrorist act is critical to understanding your coverage.

See your travel insurance plan’s definition of terrorist act – here is an example copied from the plan description document for TravelEx’s Select plan: 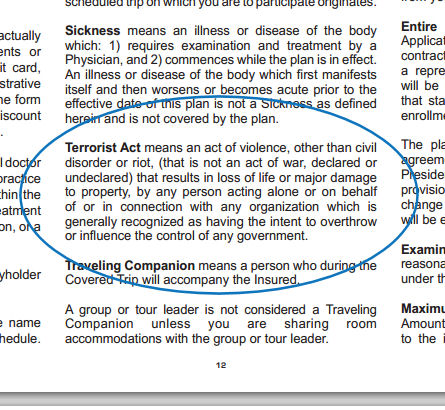 Some travel insurance plans – like Seven Corner’s Round Trip Choice plan – define a terrorist incident like this:

Terrorist Incident: means an incident deemed a terrorist act by the United States Government that causes property damage or Loss of life.

Essentially, the coverage in the plan isn’t in effect unless the U.S. government deems it a terrorist act. So, just because you’d define it as an act of terrorism doesn’t mean your travel insurance provider does.

Changing Your Mind is Not a Covered Reason to Cancel

Most travel insurance policies do not cover trip cancellations in response to a travel alert or travel warning – the terrorist action actually has to occur for the coverage to kick in. For those plans that do include cancellation coverage for terrorist actions, the following rules generally apply:

Those travelers with trips scheduled after the August 31, 2013 expiration of the global travel alert can get coverage for their trip, but remember that buying your plan soon after your first trip deposit is always recommended.

See more about terrorism as a covered reason to cancel your trip and a list of policies with that type of coverage.

Benefits May Not Be Payable for Certain Types of Terrorist Incidents

Travel insurance providers limit their losses for some events using exclusions, which are clearly defined in your travel insurance plan. For example, most travel insurance plans specifically exclude any coverage for sickness, injuries, or other losses due to war, attacks using weapons of mass destruction, nuclear, chemical, biological or other warfare – regardless of who commits the act or whether war has been declared or not.

This means that if a terrorist decides to unleash a nuclear attack where you are intending to travel or are already traveling, your cancellation, your emergency medical treatment, your evacuations, etc. will not be covered by your travel insurance plan – even if it’s defined as a terrorist action simply because of the type of incident.

If You’re Traveling Soon and Have Travel Insurance

If an event does occur within the travel alert’s time frame and you’re traveling, know that extra costs due to travel delays may be covered if the carriers stop all travel for a certain number of hours.

The issuance of a travel alert or travel warning associated with an increased threat of terrorist attacks does not automatically trigger benefits under your travel insurance policies. Travelers who are concerned about taking their trips in light of the increased threat must have purchased their insurance prior to the alert being issued.

Travelers with plans to travel after the expiration of this latest alert should purchase their travel insurance early – soon after their initial trip deposit date – and consider getting ‘cancel for any reason’ protection in case other alerts are issued and they decide to cancel.