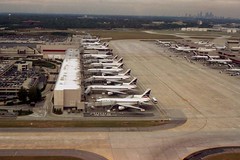 When people are traveling, they expect that everything will go according to plan. Nevertheless, certain unexpected incidents can occur during travel, and they can turn a wonderful vacation into a bad experience. One of the most frustrating things that can happen to travelers is flight delay. If the duration of the delay is only a few minutes and travelers are still able to get to their final destinations a little later than scheduled, there is nothing to complain about. Nonetheless, some flight delays can be as long as one or two hours, and they can cause people to miss their connecting flights. It can be a great ordeal for travelers to wait several hours to get on the next connecting flight, and this can certainly ruin their holiday mood.

There is no guarantee that a particular flight will not be delayed. All air passengers have to be prepared to deal with flight delays. Delays are usually caused by unfavorable weather conditions and congestion at airports. There is a higher chance that flights to congested airports, such as Newark Liberty International Airport, O’Hare International Airport in Chicago, Miami International Airport, and JFK in New York, will be delayed. Other factors that can result in the delay of flights include incompetence in maintenance, crew problems, and inefficient airport security screening. According to the Bureau of Transportation Statistics, the percentage of arriving flights in the United States that are delayed in the year 2010 is 17.55 %. This means that close to one out of five domestic flights do not arrive on time. During peak travel season, the percentage will rise to above 20%. Records for flight delays vary from one airline to another.

If it is the airline’s fault that a flight is delayed, passengers who miss their connecting flights will be put on the next soonest flight to their final destination. Nevertheless, if they are connecting to a flight by another airline, then it is not certain that they will get a seat on the next plane. In the event that a flight delay causes travelers to cancel their vacations, it is unlikely that the airline will reimburse them for the loss of their travel investments. Therefore, it is important for travelers to get travel insurance that includes coverage for flight delay. With the right travel insurance policy, they can be assured that they will get adequate financial compensation from their insurance companies in the event that unexpected incidents such as flight delay happen during travel.