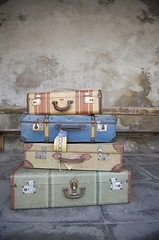 All airlines try to provide the most efficient baggage handling and transportation services for their customers. Nevertheless, baggage transportation systems have their limitations, and suitcases and packages may be delayed or misplaced while they are being transported from one destination to another. While some air travelers manage to get their lost luggage back after a long wait, others never see their belongings again.

According to airline statistics, over 30 million luggage pieces are mishandled by airlines around the world every year. Most of the time, airlines are able to reunite the luggage pieces with their owners within 24 hours, but there will still be a large number of pieces that will never be recovered. Many people wonder what happens to lost luggage. Actually, different airlines, airports and countries have different ways of handling lost luggage, and some of them are more patient than others.

Some airports have a general method for handling lost baggage, meaning that all airlines serving the same airport have to deal with lost luggage the same way. Bags that are lost in Heathrow Airport are sold at a South London auction site called the Greasby’s at very low prices. The practice of auctioning off lost luggage is also prevalent in the United States, where the contents of unclaimed bags from certain airports are sold at a 40,000-square-foot facility called the Unclaimed Baggage Center, which is located in Scottsboro, Alabama.

Certain airlines have customer service agents stationed in each airport to deal with lost baggage. These agents will try to reunite lost luggage pieces with their owners for a few days. After the initial attempt has failed, the bags will be sent to the central baggage tracing office, where they will be opened and searched. The agents at the office will try to look for personal documents, business cards, or tags that reveal the identities of the owners. If they cannot identify the owners after searching, the agents will enter descriptions of the bags and their contents into the World Tracer, a worldwide lost-and-found system that matches claims with bags. If the bags remain unclaimed after 90 days, the airlines will donate certain items in the bags to charities and dispose of the remaining contents.

Lost baggage can amount to great financial loss for travelers, especially those who have expensive items in their bags. While airlines offer compensation for lost luggage, the compensation may be much less than the actual value of the luggage. To ensure that they will get sufficient compensation for their lost belongings, travelers should purchase a travel insurance policy before their trips. Most travel insurance policies feature coverage for lost baggage, and the coverage can be upgraded to suit your needs.