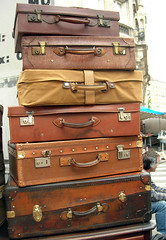 One of the most troublesome aspects of traveling is the possibility of lost luggage. Travelers who never invested in the benefits of a travel insurance policy may want to reconsider their stance on the matter, because it may be worthwhile when their luggage gets lost. In 2009, it’s reported that more than 2 million bags were mishandled by airlines in the United States. While some luggage is eventually found and returned, others are never recovered. Losing luggage can be more than an inconvenience to travelers, some possessions are invaluable and the loss of personal effects can be devastating to the owner.

Assuming that the airline had lost your luggage, it’s normal that you should be cursing your luck. After you have calmed down a little, you should be wondering if you are going to be reimbursed for your personal items. Technically, the airline has to reimburse you for the lost items but the matter is not as easily resolved as you would like. Firstly, you have to go to the baggage claim office to make a report for the lost luggage. Then, things can get tricky.

In the case where you need to buy some necessities like clothes, different airlines have different policies on the matter. Some airlines may require that you wait at least 24 hours after you have made the lost luggage report before you can make purchases for new clothes and some airlines decline to compensate for clothing if your flight is inbound. As for other personal items like tooth paste, shampoo, and soap, the airline may be obliged to provide compensation.

Generally, it’s not easy to get compensation for your personal items if your luggage is lost. For domestic travelers, the maximum liability is $3,300 for a lost luggage and it’s only $640 for international travelers. To make your claim, you will have to produce the receipts for all the items in your luggage, which can be a pain in itself. Then, there’s the waiting period when you case is being reviewed. According to industry insiders, airlines don’t really give so much haste and urgency in these matters because they would rather that you forget, and move on.

To be safe, you may want to think about obtaining excess valuation for luggage, which is actually type of secondary travel insurance. For just a dollar, you will get extra insurance of $100 on domestic flights. The ceiling is coverage of $1,700 and you only have to pay an extra $17. It’s certainly not a bad deal at all!