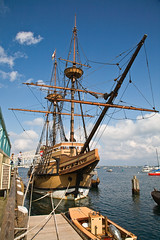 The trip that the pilgrims took to get to the New World is possibly one of the most well known in the world. People packed up all their belongings, boarded ships, and sailed across the ocean, taking a trip that took months, just to get to a place where they would be able to live without persecution.
Such a trip takes a lot of planning and, more importantly, a lot of money. Not only did it cost money to be able to board the boat itself, it cost money to stock the ship, pay the sailors and it cost money to set up an entire new settlement on an entirely different continent.

Most of the pilgrims who made the trip were actually Separatist farmers. They were very poor, mostly uneducated, and had little money to invest in a trip all the way across the Atlantic. So how did they manage to finance such a large venture? They signed an agreement with someone who could afford to send them across the ocean to a new world. Since there was no travel insurance back then, they needed extra reassurance.

The group of pilgrims went to a man named Thomas Weston. Weston was a very successful, wealthy iron merchant in London. The pilgrims respected and trusted Weston, who formed a join-stock company to handle the financial matters. He promised the pilgrims that he himself – not a Dutch or Virginia company – would be able to fully fund the trip. The pilgrims agreed to Weston’s proposal and he funded the trip once an agreement was reached.

Negotiations were long and complicated. When Weston and the other members agreed to finance the trip, they would purchase shares so that they could remain in England while the would-be Colonists agreed to contribute their services at a certain flat fee. Basically, they would work as traders or fisherman for seven years, sending back furs, lumber, and other resources so that Weston and the others could profit from it. All of their profits would be placed in a common stock fund and no land would be assigned to anyone. The trip itself was dangerous enough and with no form of cheap travel insurance, some of the pilgrims decided it wasn’t worth it, opting out of the agreement.

This was a bit of a raw deal for the pilgrims because the company was able to take complete advantage of them and they weren’t able to profit from their hard work. Yet, the chance to live in a new land was too tempting for most so they signed the agreement and the trip to America was financed.