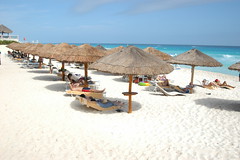 Cancun is a great holiday destination that offers miles of pristine beaches, world-class accommodations and wonderful cultural attractions. Cancun is one of the most preferred holiday destinations for Americans because it is located close to the US, but in recent years, a number of events have caused the city to experience a decline in tourism arrivals. As such, many people are trying to find out if it is safe to visit Cancun today.

One of the major concerns of tourists is the ongoing drug war between the Mexican government and the drug cartels. Violence on the streets of some cities in Mexico has escalated in the past two years, and it resulted in a great number of deaths and injuries. In 2008, over 5,000 people were killed by the mafia, and earlier this year, a former Mexican military general and two of his associates were murdered in Cancun. The US government updated a travel alert for Mexico to inform travelers about the increased violence taking place in the country, and many schools advised their students not to travel to Mexico for their spring break vacations.

Most of the drug wars occur in cities along the US-Mexican border, and Cancun is located more than 1,000 miles south of the border. According to past records, only a handful of mafia-related murders had happened in Cancun, and no tourists were murdered by the mob. As such, it is safe for people to travel to Cancun, but tourists should exercise extra caution when they are vacationing in the city. One of the safety precautions to take is to avoid areas that are controlled by the mafia, such as the red light districts. Tourists should patronize legitimate businesses only.

Another event that is affecting the tourism industry of Cancun is the outbreak of swine flu in Mexico. Also known as the H1N1 flu, the disease can result in serious health problems, and it has claimed more than a thousand lives worldwide. Medical experts believe that the swine flu originated in Mexico, and the disease has spread too many countries around the world in just a few months’ time. The emergence of swine flu has caused many people to cancel their trips to Mexico, and Cancun’s tourism industry has suffered significantly because of news of the disease. According to tourists who have been to Cancun recently, it is business as usual in the city, and few people are wearing protective masks. As a precaution, those who are planning to travel to Cancun should get a swine flu vaccination before their trips.

Other than taking the necessary precautions, it is essential for travelers to get a travel insurance policy before they set off for Cancun. Travel insurance will provide coverage for losses and expenses incurred because of illnesses, accidents, or loss, damage, or theft of baggage and personal belongings.