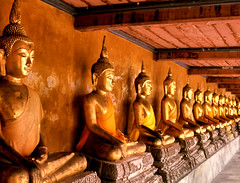 Thailand is a major travel destination in Asia offering a most unique and wonderful travel experience. Travelers will find a wide variety of attractions in this country, ranging from great natural beauty to magnificent cultural sites. Tourism is one of the main sources of revenue in Thailand, but it has been in decline since demonstrations took place in the capital city of Bangkok about a year ago. Many travelers canceled their travel plans during the height of the unrest and some are still wondering if it’s safe to travel to Thailand.

Thailand has been a politically stable country for many years, but in 2008, thousands of protesters took to the streets of Bangkok to demand the resignation of the prime minister of that time. The protest culminated in the seizure of the Bangkok International Airport, and it forced many travelers to cancel their trips to Thailand. As a result of the demonstrations, the government decided to cancel the 2009 APEC summit, which was supposed to be held in Pattaya.

Throughout the duration of the unrest, hundreds of locals were injured and a few lost their lives, however, no foreigners were killed. Other than the demonstrations in the capital city, there have been a number of reports of bombings in the southern part of Thailand. It is believed that these bombings were carried out by Muslim extremists, and they have been happening fairly frequently every year.

Even when the demonstrations were going on in Bangkok, most parts of the city were unaffected, since the protests took place around specific government buildings and important locations such as the airport. The tourist, commercial, and residential areas remained safe throughout the period of time when the demonstrations were being held. The protests in Bangkok have been quelled and life in the city has returned to normal, but the Muslim rebels in the south continue to be a threat. It is safe to visit Bangkok and the northern parts of Thailand now, but travelers should be careful if they are planning to travel to the southern part of the country, especially major cities such as Hatyai and Yala.

Generally, crime rate in Bangkok and other parts of Thailand is relatively low; accidents can happen when one is traveling in a foreign land. Road accidents are fairly common in Thailand, and many tourists have been injured and killed because of motorcycle accidents. It is important for travelers to get a travel insurance policy before they set off for Thailand, because it will provide coverage for expenses and losses that result from accidents as well as loss and theft.

Also, it is not uncommon for travelers to fall ill when they are in a distant country where the food, weather, and living conditions are different. Those who have travel insurance will get adequate compensation for medical expenses if they fall ill or become injured during their trips. A good travel insurance policy will ensure that travelers will have a worry-free vacation in Thailand.