Perhaps you recently booked your airline tickets for that vacation in the Caribbean that you have been dreaming of for so long. You have made your hotel reservations, sketched out a preliminary itinerary, and even wisely purchased a travel insurance policy and travel medical insurance. When you have made such careful plans, don’t forget to ascertain the entry requirements for each of your destinations. This is especially important on a Caribbean vacation, during which a tourist could feasibly travel to two, three, or even four or more sovereign island nations or overseas territories controlled by various Western governments. Each of your several destinations could have distinct entry requirements and require different identifying documentation from you. Foremost on your mind should be the question of the travel visa. Do you need to obtain one for any of your Caribbean destinations, and if so, when and how do you obtain it?

Fortunately, with few exceptions, United States citizens do not need visas to travel to and from destinations in the Caribbean. However, exactly what documentation is needed, and under what circumstances, ultimately depends on where you are traveling in the Caribbean and for what purpose. Most governments in the Caribbean do not require visas of American tourists who plan to remain for a relatively short period of time, that is no more than thirty days, or, in some cases, no more than sixty or ninety days. However, visas may be required if the American traveler intends to remain on a longer-term basis for the purpose of working or attending school.

Some of the most popular Caribbean tourist destinations, specifically Puerto Rico and the U.S. Virgin Islands, are territories of the United States. For American travelers, entering those territories does not differ greatly from crossing the over the border between one U.S. state and another. United States citizens may enter and leave Puerto Rico freely without presenting a visa and are not required to submit to immigration or customs screening. Similarly, a visa is not required of a U.S. citizen traveling to or from the U.S. Virgin Islands, which include Saint Croix, Saint John, and Saint Thomas. As long as an individual’s travel outside the U.S. mainland is restricted to U.S. territories, an American tourist need not even carry a passport. The only identification that an American is required to carry in order to travel between the United States, Puerto Rico, and the U.S. Virgin Islands is that which is generally required for air travel—an unexpired, government issued form of photo identification. 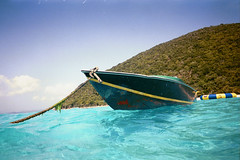 Furthermore, it is not necessary for an American to obtain a visa from the British authorities in order to visit the British Virgin Islands—an overseas territory of the United Kingdom that includes the islands of Tortola, Virgin Gorda, Anegada, and Jost Van Dyke—for purposes of leisure and recreation. However, if you do plan to extend your trip from the U.S. Virgin Islands to the nearby British Virgin Islands, you will need to carry a passport or, if you are traveling by sea, a passport card. American tourists who enter the British Virgin Islands for short-term vacations are required only to present documentary proof of their citizenship. This requirement may be satisfied by presenting a passport but can also be met by presenting other forms of government-issued identification. However, all Americans who return to the United States after visiting non-U.S. territories in the Caribbean must present a passport upon re-entry. This requirement holds even if the traveler makes an intermediate stop in a U.S. territory, such as Puerto Rico or the U.S. Virgin Islands, immediately before returning to the United States.

The British territory of Anguilla does not require American tourists to present a visa. However, Americans must be carrying either a passport or other valid documentary proof of citizenship and identity. They must also be in possession of a return or continuing trip ticket. Americans departing from Grenada are required to pay an airport departure tax.

The island nations of Antigua and Barbuda, the Bahamas, the Dominica, the Dominican Republic, Jamaica, St. Kitt’s and Nevins, St. Lucia, St . Vincent and the Grenadines, Haiti, and Trinidad and Tobago all require American citizens to present passports for entry but do not require visas for short-term tourist stays. Antigua and Barbuda, Dominica, Jamaica, and Haiti all require the presentation of a return or continuing trip ticket before granting entry. St. Kitt’s and Nevins imposes an airport departure tax, and the Dominican Republic, while it does not require the purchase of a visa, does require the purchase of a “tourist card,” available at the airport for $10.

Indeed, the only Caribbean nation or territory to require an American tourist to purchase a visa is Cuba. Regardless, Cuba presents an unusual dilemma for American travelers because it is against the law of the United States for individuals to visit Cuba without a special license. Licenses can be distributed to those with close family members in Cuba, and to journalists, academic researchers, and governmental officials and members of international governmental organization traveling to Cuba for the purpose of conducting business. It is the case, however, that many Americans persist in traveling to Cuba illegally, often by first traveling to Canada or another hospitable country that has not restricted the right to travel to Cuba. Those Americans, who do travel to Cuba, whether illegally or pursuant to a federally granted license, are required to not only present a passport but also obtain a visa from the Cuban government.

In summary, it is probably best to carry your passport with you on your Caribbean trip even if you do not plan to travel anywhere other than Puerto Rico and the U.S. Virgin Islands. If you get the opportunity to hop over to the British Virgin Isles, for instance, you will not want to decline it simply because you did not bring your passport. In addition, even though some Caribbean destinations will take other documentary proof of citizenship and identity in lieu of a passport, you are least likely to encounter a misunderstanding with border officials if you present your passport. Finally, because rules and regulations can change, it could be worthwhile, as a form of travel insurance, to double-check the websites for the Department of State and the U.S. consulates for your Caribbean destinations to ensure that you have the most up-to-date information concerning entry requirements.