When you travel to non-U.S. countries, you are facing a wide range of vehicles on and in which you can ride to get from here to there. While cars and vans are highly popular in the U.S., countries with low- to middle-income status have a much higher proportion of pedestrian traffic as well as cyclists using motorized two- and three-wheel vehicles than high-income countries.

In most of Africa, for example, walking and non-motorized cycling are the primary forms of mobility for much of the population. In Southeast Asia and Western Pacific countries, motorcycles are frequently used because they are cheap to buy and operate.

According to the World Health Organization 2013 Global Status Report on Road Safety, the following is the breakdown of road traffic deaths by type of vehicle and region. 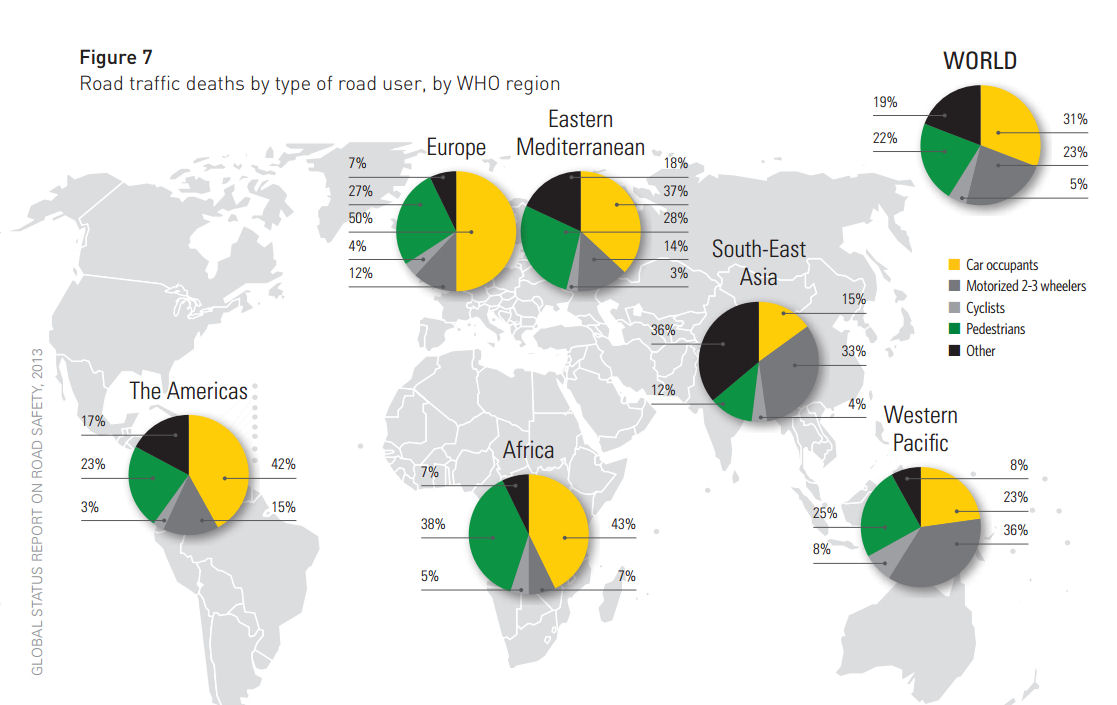 Motorcycle riders are particularly vulnerable to injuries due to a simple fact: they have no surrounding protection when compared to a standard car with seat belts, bodywork, and crumple zones.  According to Dying to Ride 2010 statistics, approximately 80% of all motorcycle crashes result in injury or death – the comparable figure for car crashes is approximately 20%.

Recent statistics in Europe indicate that nearly 70% of all motorcycle crashes involve a car, lorry, or bus.

In some regions of the world, scooters and mopeds are not only more available and cheaper, they are everywhere making these vehicles the easiest way to get around places like Bali. In fact, these motorized vehicles can be rented for as little as $5 per day and touts rarely require customers to have a valid license, be sober or wear a helmet.

According to 2011 statistics from Bali tourism reports, three people die in crashes on average every day – many of them foreign tourists. Every day as many as 300 people are treated in hospitals and healthcare clinics for broken bones, abrasions, and head injuries.

In many countries, traveling by bicycle is highly popular even before the rising popularity of guided bicycle tours. In addition, to combat parking problems and pollution many cities around the globe have retrofitted their roads with cycle lanes. Of course, for low- to middle-income countries cycling is not a transportation choice but the default mode of transportation for those who cannot afford anything else. Laborers, delivery people, and semi-skilled workers all use bicycles and many tourists like to get the street level experience.

What follows is a city-by-city review of bicycle fatality statistics:

Other Vehicular Dangers for Tourists

Of course, globally the automobile still remains the single most dangerous vehicle.

How Your Tourist Ride Relates to Travel Insurance

Specifically, nearly all travel insurance companies exclude any coverage for losses if the traveler is riding a motorcycle, motorbike, or scooter. These vehicles are simply deemed too dangerous to be covered and if you are in an accident while riding a motorcycle through the streets of Bali, neither your medical treatment nor evacuation costs will be covered by your travel insurance plan.

Some plans do allow for coverage for cyclists though. In addition, if you take your bike and check it as luggage on the airplane, it may be covered for baggage loss and delay depending on the plan you choose.