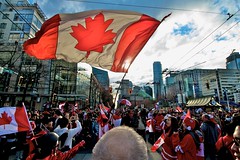 According to the Canada Border Services Agency, everyone must have a passport or equivalent documentation such as a NEXUS card or an Enhanced Driver’s License (EDL) to enter Canada by land, sea or air. Although, it is strongly suggested all citizens of both Canada and the United States carry passports when crossing borders.

Like the United States, Canada approves use of alternative travel documentation that can be used in place of a passport.

This policy was passed by Congress as The Western Hemisphere Travel Initiative (WHTI) “to strengthen border security and facilitate entry into the United States.” Travel document security remains a top priority for the U.S. government.

In the United States approved equivalent travel documentation is:

When traveling to Canada, make sure to purchase your travel insurance policy beforehand. There are several policies to choose from including; medical travel insurance, in case you are injured while away from home, single trip insurance and multi trip insurance as well. You can never be too safe when leaving your home country and entering a foreign one.